The AIM Act & The Future of HFCs in Fire Protection

The AIM Act is landmark legislation curbing the production and consumption of HFCs in the US. The AIM Act also puts a focus on economic growth through job creation and American global leadership in technology and global trade. Despite lots of talk about the AIM Act, many in the fire protection industry have questions. While this article will outline the background behind this legislation, detail how the Environmental Protection Agency (EPA) will implement the AIM Act, describe the current situation for virgin HFCs in fire protection, and share what the future may hold for HFCs, the regulatory world is always evolving and changing. Thus, your company should always check with its own counsel to help with decision-making.

The roots of the AIM Act go back to the Montreal Protocol, the international treaty that banned all production of halons and other CFCs in the developed world on December 31, 1993. The goal of the Montreal Protocol was, and still is, to protect the earth’s ozone layer, the UV-filtering aspect of which is critical for all earthly organisms. With the production of CFCs and halons banned, along with HCFCs and other chemicals, HFCs moved in to replace ozone depleting substances (ODS) at the same time as refrigeration and other technologies rapidly expanded to vast areas of the world previously without such access.

HFCs present no threat to the ozone layer. But because of their complex and durable molecular structure, they trap enormous amounts of the sun’s heat in the atmosphere—more than thousands of times per pound compared to carbon dioxide, the earth’s most prevalent heat-trapping atmospheric gas. For comparison, today’s total CO2 footprint for three round-trip airline tickets from LA to Orlando would equal the carbon footprint of one pound of HFC-227ea released into the atmosphere.

Gradually, awareness of the impact of HFCs on the climate gave rise to a regulatory framework and reporting requirements worldwide. The Montreal Protocol, the world’s largest and most successful international treaty in support of a life-sustaining atmosphere, was chosen by world climate leaders as the best forum for coordinating efforts to control HFCs and their atmospheric heat-trapping powers. In 2016, the Kigali Amendment was adopted by the parties to the Montreal Protocol; which is estimated to avoid 0.5 °C of atmospheric warming by 2047. Simply put, the Kigali Amendment outlined a phasedown schedule to reduce the production and consumption of HFCs. The phasedown schedule under the AIM Act matches the schedule outlined by the Kigali Amendment, thus bringing the US in line with the other signatory countries.

Phasedown: Rules of Reference and Supply Chain Squeeze for HFCs in Fire Protection

Since 2009, companies have reported their HFC production and consumption under the EPA’s Greenhouse Gas Reporting Program. Such historical data was used to calculate the HFC production and consumption baseline as a starting point for HFC reductions. It is important to note that the baseline and the subsequent reductions from the baseline are calculated without reference to the quantities of each HFC. Instead, they reference the total atmospheric heat-trapping power—or global warming potential (GWP) where “1” equals the atmospheric heat-trapping power of CO2—of all HFCs per company. Using this “total GWP” method, the AIM Act creates a new market driver for the industry to innovate and adopt technologies that warm the atmosphere less.

With the production and consumption baseline established, the AIM Act phasedown occurs over 15 years, from 2022 to 2036, with step-downs from 5 to 30% of baseline. 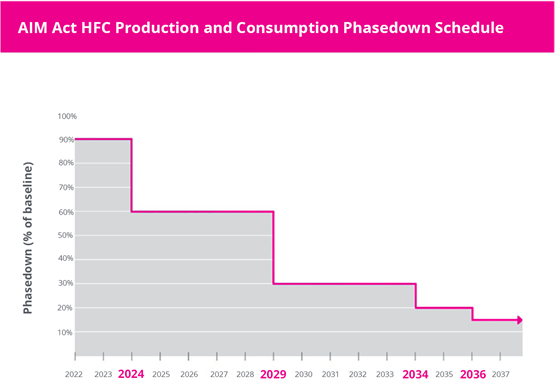 To achieve these reductions, the EPA developed a system of allowances allocated to valid virgin HFC producers and consumers. Baseline and allowances are measured in a GWP-based system of units called Metric Tons of Exchange Value Equivalent (MTEVe). MTEVe is a measure of atmospheric heat-trapping power, where 1 MTEVe = 1 metric ton of CO2.

With a virgin HFC production baseline of 382.6 million MTEVe, a consumption baseline of 303.9 million MTEVe, and the input by each company to the total baseline, the EPA grants allowances to virgin HFC producers and consumers in proportion to the contribution of each to the total (consumption = HFCs produced + imported - HFCs exported). During the phasedown period, the allowances per company are reduced following the phasedown steps. Those allowance allocations follow a calendar year; for the coming year, allowances are published on October 1, annually, and go into effect on January 1. The EPA requires quarterly and annual reports from all virgin HFC producers and consumers, along with an annual certified public accountant’s audit of the reporting.

Given the above, it’s easy to see how the supply of virgin HFCs is squeezed by the AIM Act (we’ll talk about recycled and reclaimed HFCs in the next section of the blog). However, the effect of the phasedown on the fire protection virgin HFC supply chain is much more severe than the basic phasedown steps suggest. This is due to the higher GWP of fire protection HFCs vs. refrigerant HFCs and the different market sizes and dynamics of those sectors.

Globally, the clean agent fire suppression market is mature, whereas the refrigeration market is still expanding rapidly, and this creates a lot of pull in favor of refrigerants.

Because the frame of reference for all AIM Act rules is the GWP aggregate production or consumption by entity—and not on pounds of specified HFCs—HFCs used in fire protection are disproportionally impacted since their GWP values are higher than many refrigerants. Let’s compare some fire suppressant HFCs to the most widely used HFC in refrigeration, HFC-134a:

In summary, if you combine these factors:

…it’s easy to see that HFC producers can make more money per allowance by making lower-GWP virgin HFCs for refrigeration, etc., than the higher-GWP HFCs for fire protection.

The Solution: Participating in the Circular Economy

Beyond the stated goal of the AIM Act to phasedown the production and consumption of virgin HFCs, a concurrent goal is aimed at maximizing the reclamation of HFCs, most of which will re-enter the supply chain to be reused in the early decades of the AIM Act. The rules are constructed, therefore, so that all US-based bulk HFC traffic in the reclaimed/recycled markets are totally exempt from the phasedown and allocation framework.

There are a couple of reasons behind this:

If you’re involved in producing, specifying, or maintaining HFC-based fire protection equipment for end-users, you’ll be facing the same question I get every day: “What is the effect of the AIM Act on the long-term supply of HFCs for the equipment I’m specifying now?” Timeframes for such equipment are 20 years or more. How do we answer this question?

My answer comes from comparing the expected effect of the AIM Act on HFCs to the Montreal Protocol’s effect on the use and long-term supply of halon.

Halon’s Path Points to the Future

Because the Montreal Protocol put a worldwide (except for developing countries) total production ban on CFCs including all halons in 1993, 95% of all halons ever produced had been made by December 31, 1993. Peak Halon, in 1991 when the worldwide bank of halon 1301 was the greatest, had a total of 77,000 metric tons. Yet, almost 30 years later, the industry continues to hold consistent pricing while meeting all required recharges for widely used existing equipment. And that’s all while large amounts of recycled halon stocks are going into new equipment, especially in aerospace.

The most recent figure on the HFC-227ea global bank is from the UNEP’s Halons Technical Options Committee (HTOC) 2018 Assessment, which shows a global bank of HFC-227ea at 128,500 metric tons—81% more than peak halon. Of course, you must apply a conversion factor for the fact that it takes ~1.5 times the amount of HFC-227ea (Class A) to equal the firefighting power of 1301. Even taking this into account, the firefighting power of HFC-227ea banks worldwide in 2022 likely exceeds peak halon quantities. 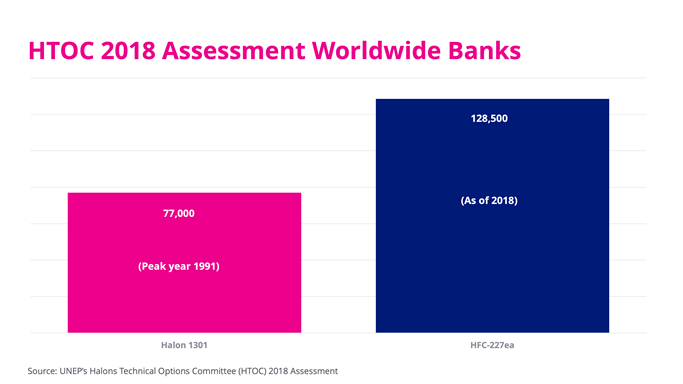 With halon, we faced a total production ban, as opposed to the phasedown under AIM. Because of this, it is reasonable to expect that the worldwide bank of HFC-227ea will continue to grow in this decade.

The story of halons post-Montreal Protocol provides a long-term roadmap for HFC-based fire protection. With the halon production ban, many halon users in terrestrial applications could afford, with value maintained in the gas by a recycle-friendly regulatory environment, to sell their halon and upgrade to a newer technology. Others (oil & gas, aerospace, etc.) didn’t find it as easy to change, so they keep alive a demand for recycled material. Case in point: every passenger aircraft flying today is protected from fire by halon.

Clean Gas is as Good as New

Based on the AIM Act’s preference towards the industry using recycled fire protection gases, a fire protection clean agent like HFC-227ea will be plentiful enough for manufacturers of new fire suppression equipment to sell it filled with recycled stocks. This much is certain: there is no regulatory restriction against it, nor will there be in the future. UL listing and FM approval present typical commercial hurdles, but they aren’t immovable barriers. In fact, major US fire protection equipment suppliers produce a wide variety of fully UL-listed halon 1211 portable extinguishers today—and have done for over 20 years—each of them filled with recycled halon 1211.

There will be skeptics after the price increases we’ve seen on HFC-based fire protection equipment in 2022. But those skeptics are likely to transition out of HFCs as a result, which will increase the availability of HFCs for those who need or want to continue with reclaimed HFCs. Most importantly, both ways help slow the rate of atmospheric warming!

It should not escape notice that end-users may have a sharp interest in the environmental benefit that participating in the HFC-based circular economy brings them. Accessing fire protection equipment filled with HFCs from a regulated recycled market may help check off important boxes for enterprise sustainability commitments.

While the AIM Act does bring many added complexities to the industry, we already have experience managing and succeeding in even more strict regulations. As such, the fire protection industry will continue to provide critical services to keep people and property across the world safe.

Continue learning about the AIM Act and related legislation from these resources.